The Sharpening Stone – Next One Up

I have always had a love for sports, and especially in big games when a title or championship is on the line. It’s always been interesting to me to watch those that you expect to do well deliver in the clutch, but I’ve always been more intrigued by those that had little expectations and were largely unknown; but get an opportunity, a “shot”, because of a circumstance that occurs in the game.

That’s why really great coaches employ a philosophy with their team as, “Next One Up”, that everyone needs to be prepared and ready to step in when called. Do you remember little-known backup QBs named Kurt Warner and Nick Foles who stepped into the spotlight when their teammates got injured and led their team to a World Championship in the SuperBowl?

This concept is just as important for you as a leader in your organization. You may feel your organization is set with experienced managers – but what happens when one of those managers leaves? Maybe they decide to retire earlier than expected, or decide to leave and pursue other interests … what will you do if / when that occurs? Do you have a plan that allows you to seamlessly move that “Next One Up” into that vacated position?

As a leader, a succession plan should be one of your top priorities. You owe it to your employees, customers, and shareholders to have a plan in place to address key personnel changes.

Let me suggest a relatively simple tool that you can use to help you process your plan. It’s called a “9-Box”, and allows you to review people on your team along two criteria, their sustained performance, and their potential. As you can see here (Visual A), performance is listed along the Y-Axis (Low, Medium, High) with Potential along the X-Axis (Low, Medium, High). And as a result you have 9 boxes. The idea is not to move people sequentially from box to box, it’s to evaluate what box they are in based on performance in their current role, as well as potential to fulfill future leadership role(s). 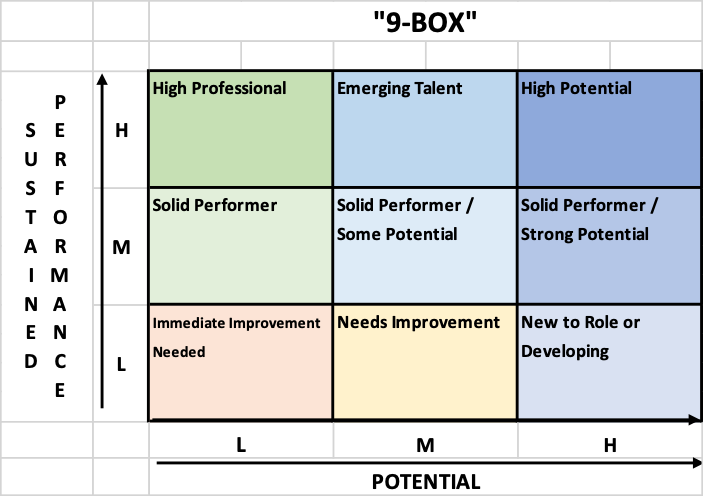 Also, everyone on your team should have a development plan, and this “9-Box” tool allows you to be more specific on the type of development they need.

After reviewing people on your team, certain boxes, indicated by the red line and star, form your talent pipeline (Visual B). 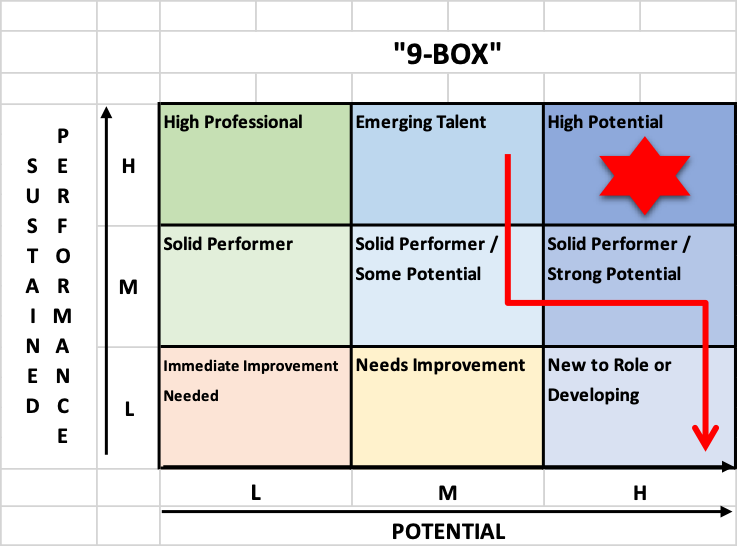 So, if you have people in these boxes, then you have people slotted to be called “Next One Up”. If you do not, then you’ve got work to do to develop someone in, or look outside, the organization.

So Coach – it’s time to play the game! Who’s “On Deck” ready to deliver for the team?

If you would like to learn more about using this tool for your organization, feel free to contact us, and we’ll be glad to serve you.

Sharpening Stone is a series of short videos from True Edge designed to sharpen leaders and their organizations.

About the Author: Steve Erb

Steve is a graduate of Purdue University where he received his Bachelor’s degree in Mathematics / Statistics, and Villanova University, where he received his MBA. Steve’s career has included senior leadership positions with two Fortune500 companies in Procurement, Logistics, Supply Chain, and Operations. Steve also built out the Organizational Development/HR department for a software technology firm and was a key part of seven (7) acquisitions over a 2-year period; as well as developing a successful compensation strategy and structure.

Steve’s expertise lies in developing operations strategies that eliminate redundancies; streamline processes/systems; and deliver productivity, quality, and efficiency gains. Steve has a proven reputation for caring for employees and teams, resulting in an overriding “Servant Leadership” mentality that transforms company cultures and creates a sense of employee engagement and accountability. Steve is also known for his change management expertise and ability to gain credibility to align performance drivers, customer expectations, and initiate continuous improvement across multi-site operations.

Rely on our executive experience and professional psychological expertise to help you find your True Edge.